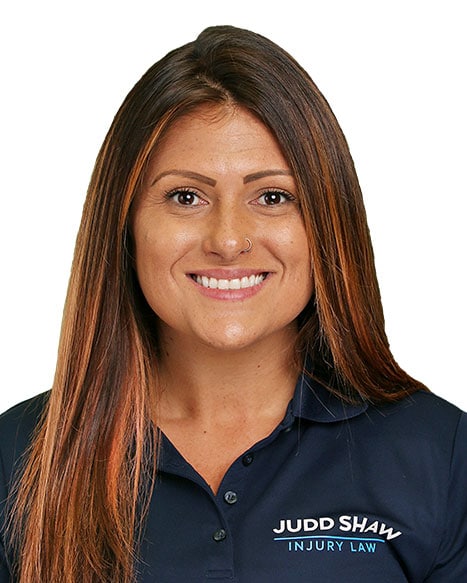 Chief of Staff
"
The true passion in my role is helping the CEO and the company be greater because of the work I put in. The better the company, the better results our clients receive - that can really make a difference in our clients' lives.
"

As the Chief of Staff at the helm of JSIL, Christine (Chrissy) Vergara, juggles the tasks of supporting the firm’s CEO while ensuring every member of the firm serves as a client’s knight in shining armor. Long before Chrissy was tapped to oversee day-to-day operations and high-priority initiatives, she served several roles within the company. In 2012, Chrissy started with JSIL in legal support and moved up the ranks, as intake manager, then claims manager, eventually becoming the senior manager for the firm’s no-fault practice. In 2019, Founder & CEO Judd Shaw had no on-going formal search for the position, but felt his time was both too limited and easily wasted. Shaw needed someone to execute identified priorities and daily efficiencies that would allow him to be more focussed on company vision. During a conversation with Chrissy about her completing an important project by going the extra mile, Shaw realized she was the “perfect fit” for the executive role.

When naming Chrissy as Chief of Staff, Shaw stated, “High-quality legal representation and 1st class service has always been the heart and soul of Judd Shaw Injury Law, and it’s wonderful to rely on Chrissy’s outstanding talents to support my vision.”

It’s a massive job, but one well suited for Chrissy, who not only built and managed many of the successful processes the firm uses today, but she is an effective leader and well-respected by her team. She is known for her tactical and organizational skills. Showing grace under pressure, keen judgment, problem-solving skills, and a willingness to work behind the scenes, Chrissy successfully spearheaded the movement to a new practice management solution that powers the business today. Her results-driven tenacity cleared the path for the firm and its team to see its fullest potential and remain competitive by offering top-notch professional services.

As the CoS, her number one priority is company culture. The firm’s belief is that if you get culture right – with the right people doing the right jobs – most other stuff like delivering great service and building a long-term enduring brand will just happen naturally. As one of the youngest CoS in the industry, Chrissy still operates as the old management adage goes: you can’t have deeply engaged clients without deeply engaged employees. Creative and effective, don’t let her size fool you – after all, the electron is one of the smallest particles, yet its energy is powerful.

Let Us Help You Get Your Life Back to normal again

Your health and safety are absolutely paramount to us. At Judd Shaw Injury Law, we’ve developed and implemented policies, in accordance with Federal and State guidelines.